A beloved winter food, the sweet potato has been present in Japan for hundreds of years. Not as renowned as its more famous staple counterparts like rice and noodles, it has nevertheless been a quiet background actor, helping sustain the country any time the weather was cold and food scarce. Known in Japanese under different names (satsuma imo, kara imo, ryūkyū imo, kansho, bansho…), this variety of denominations hints at an interesting history. Today, we’ll take a look at the sweet potato, its origins and its impact on Japan. 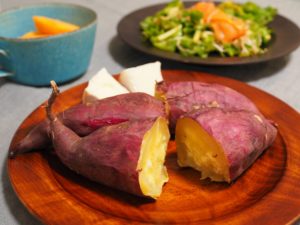 The sweet potato is a plant native to South and Central America. It was first domesticated around the 3rd millennium BCE. European explorers found it after reaching the Americas, and brought it back to Europe.1 As it is a hardy and easy to cultivate crop, even in poor soils, the sweet potato spread quickly through Africa and Asia, following the trade routes established by European nations.2 It was brought to the Philippines by the Portuguese, before reaching China. From there, it arrived in the Ryūkyū kingdom (modern day Okinawa) sometime around the end of the 16th century.

A local story from the Miyako islands recounts the introduction of the sweet potato. In 1594, Chōshin Ujioku, a native from Miyako island, was returning from business at the Okinawa main island when strong headwinds pushed him all the way to China. He stayed there for 3 years before leaving for Miyako in 1597, bringing back with him sweet potatoes he had found during his stay. Drifting again, his ship ended up washing ashore in Kyūshū. He finally made it back home while leaving potatoes in southern Kyūshū and Okinawa. In his memory a sweet potato shrine still stands today in Miyako.3 4

Another version has Noguni Sōgan, an administrator in charge of relations between China and the Ryūkyū kingdom, going to the Fujian province of Ming China and bringing back a potted sweet potato in 1605. Seeing the potential of this new plant, a local leader and entrepreneur, Gima Shinjō, asked Noguni Sōgan to teach him how to cultivate it and promoted its use in the kingdom. The crop would go on to become an important complement to grain cultivation.5

Consequently, the sweet potato would quickly spread to the Satsuma domain (present day Kagoshima prefecture, southern Kyūshū), from where it would get its most common name in Japanese: satsuma imo (Satsuma potato). However, there wouldn’t be any widespread cultivation of the root in Japan until the 18th century. The domain would go as far as to ban the exportation of the crop to other regions. A legend from the Seto inland sea region relates how in 1711 a pilgrim from Ōmishima in the Iyo province (modern day Ehime prefecture), Asami Kichijūrō, traveled to Satsuma where he ate some sweet potatoes, and braving the domain’s edict, brought seeds home, where he spread its cultivation.6

From 1731 to 1733, a food shortage, the Kyōhō famine, would hit the country and bring to starvation 2’650’000 people, claiming at least 12’000 lives.7 However, people from Ōmishima avoided the worst of it thanks to the potatoes they were cultivating at the time, as opposed to other regions that were relying mostly on the more traditional grains. This legend goes on to show the importance of diversifying crops to avoid similar famines, and the important role the sweet potato would play as a famine crop for Japan’s agriculture.

The spread of the sweet potato to the whole country would be in no small part thanks to Aoki Konyō, nicknamed Kansho Sensei (“Professor Sweet Potato”). Aoki Konyō was an 18th century scholar working for the shogunate. After the Kyōhō famine, he went about finding a solution to the crop failure issue endemic to Edo period Japan. In 1735, he petitioned the shōgun Tokugawa Yoshimune about the benefits of sweet potato culture, and wrote a treaty, Bansho Kō (“Sweet Potato Pamphlet”). To demonstrate the feasibility of his project, he set up several prototype plantations in the shōgun’s gardens where he successfully grew the potatoes. The crop finally spread to the whole of Japan and helped alleviate subsequent famines.8 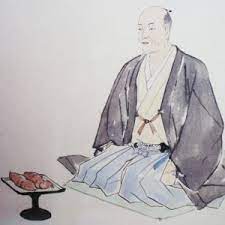 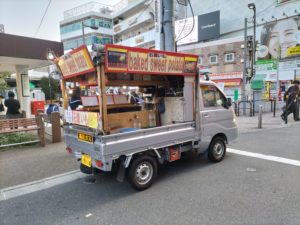 Ishiyaki imo and other dishes

During WW2 and in the immediate aftermath, the country was suffering from food shortages due to the war effort and devastation. Being hardy and easy to cultivate, sweet potatoes were grown anywhere space was available, in gardens and on athletic grounds of schools.9

Tasty and affordable, it garnered quite some success, and in the 50s, possibly inspired by ramen carts, street vendors started to use hand-pulled carts to go make rounds in neighborhoods. The back was fitted with a pebble oven where the potatoes were slowly baked, hence the name ishiyaki imo (stone baked potato). At first drawn by hand, the carts would later motorize and become small trucks. The ishiyaki imo truck arriving in the neighborhood with its sweet smell and the “Ishiyaki imo, o-imo!” call from the vendor is a fond memory of childhood winters for many Japanese. Although they are now less commonplace, they can still be occasionally spotted in town during the cold months of the year. Moreover, stone baked sweet potatoes can often be found in supermarkets across the country.10

Another common sweet potato dish is daigaku imo (university potato). The sweet potatoes are candied with a mix of honey, soy sauce, sugar and mirin. Being very filling and reasonably priced, they had a lot of success with university students buying them at stalls around campuses, from which they got their name. They are also commonly found at stalls during festivals.

Sweet potatoes are also used for making kuri kinton, a staple of o-sechi ryōri (New Year’s cuisine), as well as some varieties of shōchū (Japanese liquor). Sweet potato cultivars are constantly being bred and developed, and a lot of varieties are being eaten in Japan: beni azuma, annō imo, silk sweet…