A flagship and precursor of the yōgashi (洋菓子, Western confectionery) trend, the baumkuchen (バウムクーヘン, baumukūhen) is a beloved pastry present in Japan for more than a century now. Simple yet elegant, its refined flavor and texture make it a mainstay of department stores where bakeries proudly display the cakes slowly being baked. The introduction of the baumkuchen in Japan is a story of circumstances, which we’ll take a look at today. 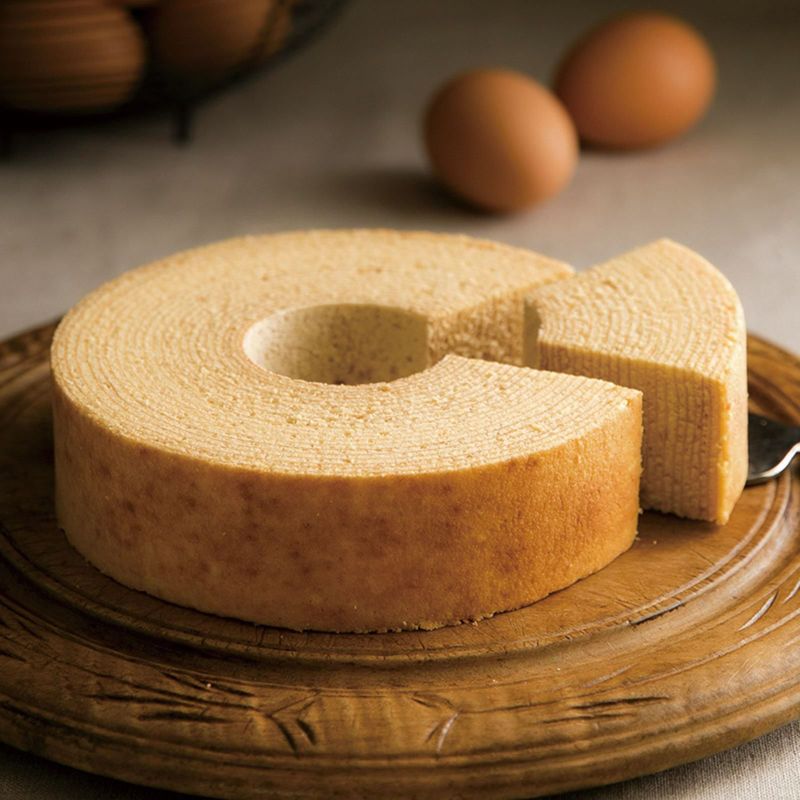 Origins of the baumkuchen in Europe

Baumkuchen is a type of spit cake originating from Germany. There are numerous local variations of spit cakes in Europe, such as the Lithuanian šakotis, the Swedish spettekaka, the Hungarian kürtőskalács or the Austrian prügelkrapfen. Although their origin is unclear, they all have in common that they are baked while wrapped around a spit, hence the name. They are most often eaten during celebrations and holidays.1

The word baumkuchen comes from the German Baum (tree) and Kuchen (cake), due to it having layers reminiscent of tree rings. During the baking, dough is continuously added on the rotating spit to make a layered cake and achieve this effect. The process is time consuming and requires specialized machinery.2

The baumkuchen made it to Japan at the beginning of the 20th century thanks to a German confectioner: Karl Juchheim. Born in Germany in 1886, Juchheim moved to China and opened his own pastry shop in Jiaozhou in 1909. Still in China during WW1, he was captured by Japanese forces in the aftermath of the siege of Tsingtao and sent together with his wife Elise to an internment camp in Okinawa, then later relocated to Ninoshima, a small island near Hiroshima in the Seto inland sea.

In 1919, a German exhibition was organized in Hiroshima city, and Juchheim baked baumkuchen on this occasion. As the term “baumkuchen” was deemed to difficult to understand and pronounce for the Japanese public, the pastry was first dubbed pyramid cake (ピラミッドケーキ).3 Those were highly successful, and the couple chose to stay in Japan after the war to open their own bakery in Yokohama in 1922. Following the Great Kantō Earthquake of 1923, the shop was destroyed and the Juchheim family relocated to Kōbe, where they opened another shop which became very popular. After the death of Karl Juchheim in 1945, the company bearing his name continued to produce baumkuchen and still exists to this day.4 5

Nowadays, baumkuchen can be commonly found in supermarkets and convenience stores, as well as at high end specialized shops. Common variations include flavors (sakura, chocolate, maccha…), glazing, shape and texture. The tree-like rings of the baumkuchen are thought to represent longevity and prosperity, making it an auspicious cake often gifted and eaten at weddings.

Among the numerous companies producing their brand of baumkuchen, the most popular ones are Juchheim, Nenrinya, and Ji-ichirō.