Packed full of flavors, easy to cook and delicious to eat, sukiyaki (すき焼き) is a staple of Japanese food, enjoyed both at home and outside with friends. Prepared with ingredients available anywhere and highly adaptable, nowadays it is a popular hotpot dish bringing people together. Easily recognizable with its beef cuts dipped in raw beaten eggs, it has an interesting history, its roots going back to the Meiji restoration and the creation of the modern Japanese state. Today we’ll take a look at what sukiyaki is, the origins of the dish, as well as where and how to eat it. 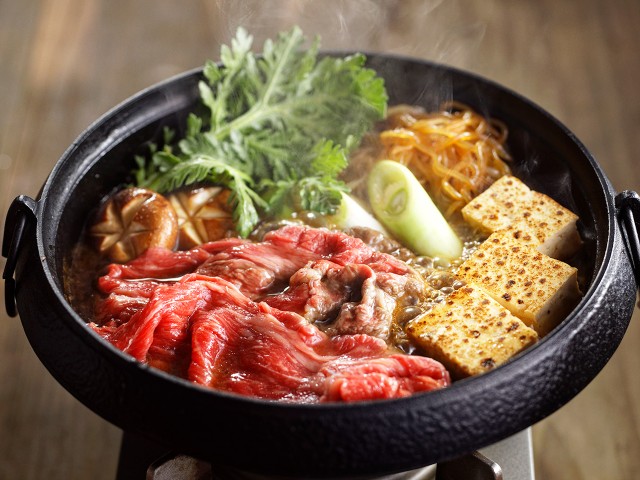 Sakoku and the opening of the country

For several reasons, notably religious, the Japanese diet didn’t include much meat, eggs or dairy products up until the events of the bakumatsu period (end of the Tokugawa shogunate and Meiji restoration, 1853 – 1868). Japanese culture has been influenced by the zen school of buddhism, which forbids the killing of living beings. This was reflected in the medieval Japanese diet, where meat and eggs were rarely, if ever, present. Nowadays, those principles can still be found in the Buddhist shōjin ryōri (ascetic cuisine), cooked while respecting those tenets.

This came to change following the progressive end of the sakoku (closed country) policy after 1853, which led to renewed contacts overseas. Foreign traders and diplomats coming to Japan brought with them new ingredients and recipes, which adapted to the local taste and conditions lead to the creation of new dishes. Those dishes would form the basis of the modern yōshoku (Western food) cooking, bringing an emphasis on eating beef, chicken, pork, eggs and dairy products.

As there wasn’t any local meat production, animals had to be imported from overseas. Without modern refrigeration methods, the beef meat was quite hard and had a pungent smell. To cover it, the meat was simmered with miso and scallions in iron pans. Those dishes, with their regional variations, would come to be called gyūnabe (beef pot) in the Kantō (Eastern Japan) region and sukiyaki in the Kansai (Western Japan) region.

Gyūnabe and sukiyaki were novelty dishes that didn’t enjoy widespread popularity at first. However, during that time of political turmoil, the idea of adopting western concepts and technology to strengthen the country was gaining ground. Proponents of the modernization of the country, such as Fukuzawa Yukichi, were advocating the consumption of meat and dairy products, touted as necessary for strengthening the health of the Japanese population.1 The Emperor Meiji, sole leader of the country after the abolition of the Tokugawa shogunate (1868), was known to eat meat in public to help further spread the western diet.2 As a maxim of the period said, “He who does not eat gyūnabe, does not advance civilization” (牛鍋喰わぬは開化せぬ奴).

Moreover, as cattle was being introduced in Japan, meat quality began to improve and the miso in the gyūnabe and sukiyaki was progressively replaced by other condiments: sugar, soy sauce, sake, mirin… Vegetables and other ingredients were also starting to be used in addition to scallions. Those dishes became widely popular and eaten across the country.

There were a lot of regional declinations, depending on local ingredients and cooking. The two main styles, Eastern (gyūnabe, centered around Tokyo and Yokohama) and Western (sukiyaki, centered around Osaka and Kyoto) differed in the broth used and the cooking method.3 In the gyūnabe, the vegetables and the beef are placed together in an iron pot, a warishita broth (mixture of sake, soy sauce, mirin and sugar) is added, and all the ingredients are slowly simmered together. As for the sukiyaki, the meat is first sizzled with beef tallow in the pot before adding the vegetables. Once they have been cooked, zarame sugar and soy sauce are added. The custom of dipping the meat in raw beaten eggs may also have come from Kansai style sukiyaki, possibly to help cool the food coming directly from the pot.4

Other regional variations include the use of different meats (chicken, pork) or replace the meat altogether with fish. 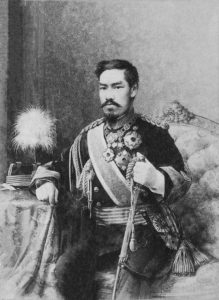 The origins of the name sukiyaki are still being debated. One widely suggested theory is that it comes from the Japanese suki (鋤, “hoe”) and yaki (焼き, “grilled, cooked”). The meat could have been cooked outdoors on those gardening tools, leading to the name sukiyaki. Another hypothesis reads suki as 好き (“to like, preference”), as various ingredients could be added to the pot following one’s preference, an etymology similar to the okonomiyaki (お好み焼き, using another reading of the word 好き).

Following the Great Kantō Earthquake (1923), a lot of shops in Tokyo and Yokohama were destroyed. People from the region temporarily moved to the Kansai, where they became accustomed to the Western sukiyaki, and brought it back home, along with the name. Consequently, the term gyūnabe fell into disuse. However, the Kantō style sukiyaki continues to use the warishita broth, which can be seen as a way to combine the best of both worlds, as the zarame sugar can have a tendency of burning in the pot.

Nowadays, the sukiyaki is most often eaten with fine slices of beef, tofu (usually seared), vegetables, mushrooms and shirataki glass noodles. The pot is placed in the middle of the table, and guests take bite sized portions of ingredients before dipping them in raw egg and eating over a bowl of rice. As the bites are dipped, the broth drips in the egg, adding a new layer of taste to the dish as it is being eaten. Although it is inspired by Western food culture, which would designate it a yōshoku dish, the cooking method and ingredients of the sukiyaki are very Japanese, making it more of a hybrid dish. 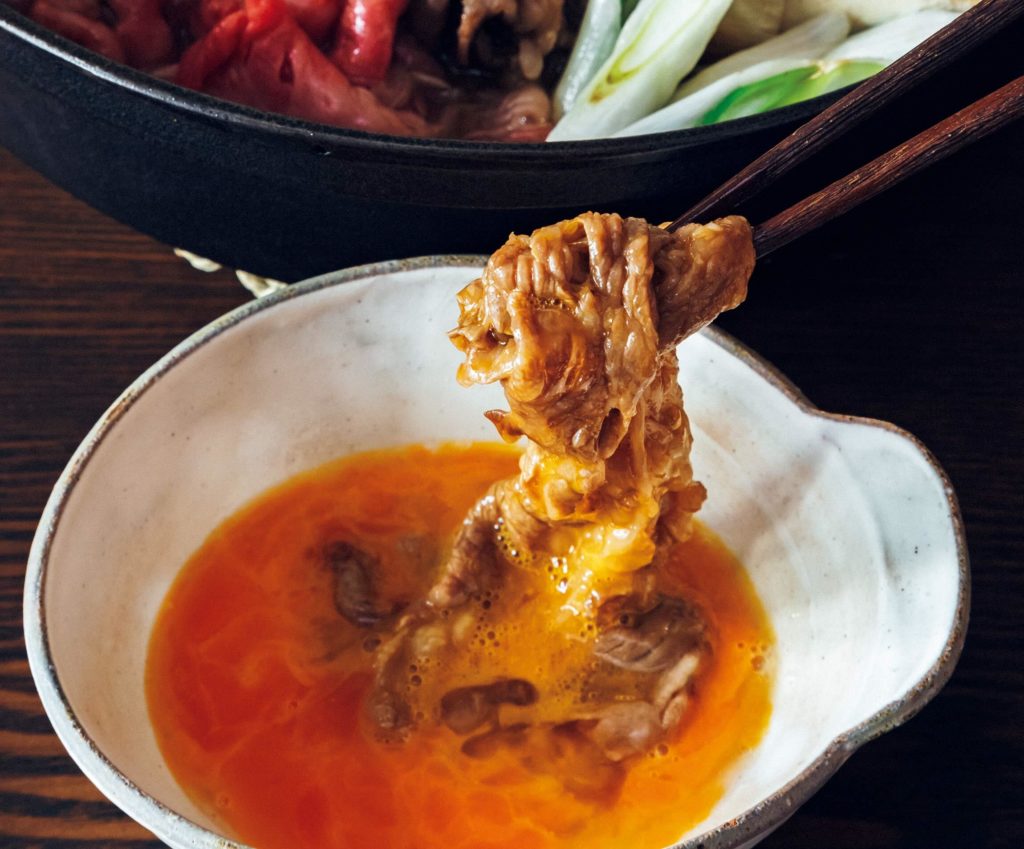