Present on plates (and pots) since prehistoric times, the skipjack tuna, called katsuo, has an unmistakable taste with which all Japanese people are familiar. Valued since ancient times, it has continuously evolved in parallel with the history of food in the archipelago and has always been present, be it as dish, flavoring, tribute or commodity. Sometimes overshadowed by its more famous maguro (bluefin tuna) cousin, it has nevertheless had its impact on Japanese cooking through its dried, seared, boiled or fermented forms. Today, we’ll take a look at the history of this lively sprinter of the oceans. 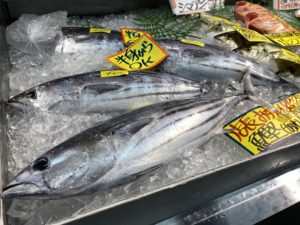 The katsuo, mainly found in tropical and warm-temperate waters of the Atlantic, Indian and Pacific Oceans, is part of the tuna family.1 Reaching up to one meter in length when adult, it is known as a particularly energetic fish. Indeed, when fleeing it can reach speeds close to 100 km/h, powered by muscles averaging 68% of its body mass.2 3 Moreover, similarly to tunas and some species of sharks, the katsuo needs to keep swimming in order to breathe. Leaner than bluefin tuna, its deep red meat is rich, with a strong flavor.

In Japan, the katsuo is found on the Pacific coast. In the summer, it migrates to the northern end of the Tōhoku region, where the warm kuroshio and cold oyashio currents meet. This katsuo announcing the summer is called hatsugatsuo (初鰹, “first katsuo”) and is at its leanest. In the autumn, when the oyashio current becomes stronger, the katsuo go back south and is called modorigatsuo (戻り鰹, “returning katsuo”). Fattier after having swum in cold waters, the modorigatsuo fetches a higher price on fish markets.

In modern times, the term katsuo is most often written in hiragana or katakana (かつお or カツオ). The kanji character for katsuo can be written as 鰹 or 堅魚, composed of the characters 堅 “hard” and “fish”. The latter term seems to have been used mostly until the middle of the Heian period, whereafter it was progressively replaced by the former.4 A probable etymology is that the fish becomes hard when boiled, and was most often dried in solid blocks for conservation. Although the most direct English translation would be “skipjack tuna”, the term “bonito”, encompassing several other close species, is commonly used to translate katsuo.

Origins and evolution of katsuo cooking

The katsuo has been fished and eaten in Japan as far back as the Jōmon period. 5000 years old katsuo bones have been found at the Hachinohe archeological site in Aomori prefecture.5 Its abundance in waters along the archipelago and ease of conservation once dried made it a mainstay of cooking in Japan and an important source of animal protein.

Until the end of the Kamakura period, katsuo was most often sun dried. It could also be boiled before drying (煮鰹, nikatsuo), or mashed and boiled down into a thick broth (鰹前汁, katsuo no irori), used for seasoning. The Taihō code (701 CE) mentions those dishes as important tributes to the imperial court.6

A new method of preparation emerged in the first half of the Muromachi period. A cooking treaty from 1489, the Shijōryū hōchō gaki (四条流包丁書), mentions hanakatsuo (花鰹, “flower katsuo”), thought to be katsuo smoked over straw, then left to hang for drying. When cooking, the resulting piece was shaved into flakes. This allowed the fish to be kept longer, allowing it to be transported across Japan as a tribute for feudal lords, as a commodity by merchants, or as a field ration by samurais.

Some researchers think this method might have been imported to Japan from the Malacca sultanate (present day Malaysia and northern Indonesia) via the Ryūkyū islands (present day Okinawa). According to this theory, the sultanate would have procured katsuo prepared this way from the Maldives, where katsuo cooking is documented since at least the 14th century. Acting as an intermediary, Malaccan traders would have brought the technique to the Ryūkyū islands, from where it spread across Japan.7 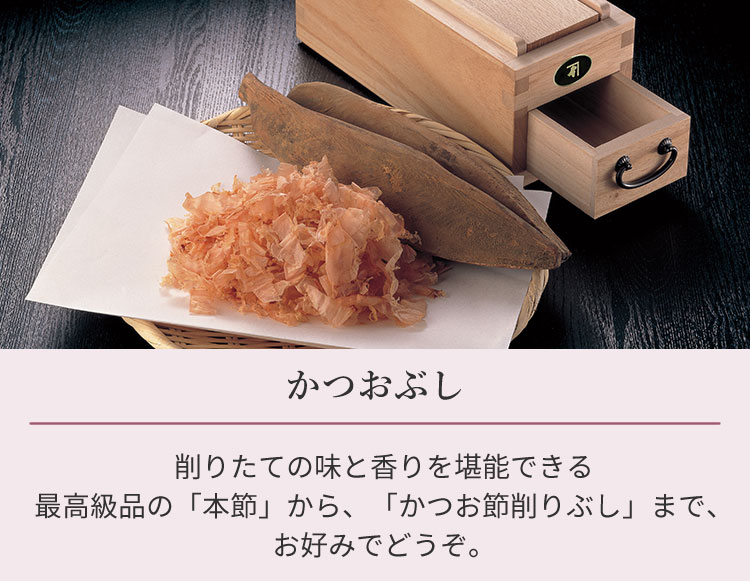 Emergence and spread of the katsuobushi

Although the term katsuobushi (鰹節) was first mentioned in the Tanegashima Kafu (1513), its modern form wouldn’t appear until the Edo period. The method of smoking would first need to evolve and mold would need to be added.

Kadoya Jintarō, an early Edo period fisherman from Inami, Kii province (present day Wakayama prefecture) is credited with being the first to experiment with replacing straw by wood for smoking.8 Coupled with longer smoking and drying times, this method, dubbed kumano (熊野) style, produced a more solid piece of fish, akin to a hard piece of ebony. His use of maki pine was kept a trade secret, and after his successor moved to Tosa province (present day Kōchi prefecture), those two provinces were the only ones producing katsuobushi for a while.

The process was further refined in Shimizu, Tosa province, by adding mold to the drying katsuo to help extract humidity from the middle of the block. Processed this way, the katsuobushi can be conserved virtually indefinitely if kept dry. It is this version that would finally spread across the country at the end of the Edo period and beginning of the Meiji era. Tosa, Izu (present day Shizuoka prefecture) and Satsuma (present day Kagoshima prefecture) provinces were known for their katsuobushi. Manufactures in the Izu province further expended on the process by further lengthening the drying and molding process to produce high grade honkare (本枯) katsuobushi. On the other hand, kumano style katsuobushi without molding would be called arabushi (荒節).

The oldest method still in use is the tebiyama shiki method (手火山式). The filetted and boiled katsuo are placed in bamboo steamer baskets on top of a wood-fueled stove. Once the humidity at the surface of the fish has been eliminated, the steamers are removed from the stove and the katsuo is left to rest. The humidity left in the center of the fish will slowly permeate to the surface, at which point the steamers are put back on the stove. This process is repeated until the desired level of dryness has been reached. As the fish is very close to the flames, great attention must be paid to avoid burning or over-drying. This also gives a very potent, smoky flavor to the katsuobushi.

With the kyūzokko (急造庫) method, the whole building works as a tebiyama shiki stove. Wood is burned on the first floor, while the katsuo is placed on the second floor. Once it starts to get dry, it is moved to the third, and then the fourth floor. This method allows production in greater quantities while still keeping the smoky flavors of the tebiyama shiki method.

The most commonly used method today is the yaizu shiki kansōko (焼津式乾燥庫). It is similar to the kyūzokko method, but the fire is lit in a separate room. Fans then pull the heat and smoke through the katsuo, resulting in a higher drying efficiency. Some factories also first use this method to dry the fishes before using the kyūzokko process to add a stronger smoke flavor. 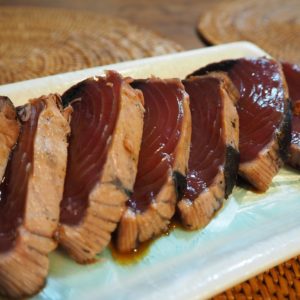 Dashi, katsuo no tataki and other dishes

As we have seen, the most common use of katsuo in Japanese cooking is in the form of katsuobushi, and katsuobushi flakes can easily be found in any supermarket. As a topping, it is often used to add a distinctive umami flavor to takoyaki, okonomiyaki and ochazuke, “dancing” as heat contracts the flakes and makes them move, to the delight of little kids. Chopped and mixed with shōyu, mirin and sugar, it is called okaka (おかか) and used as a furikake topping for white rice or rolled in rice balls to make okaka onigiri. Katsuobushi is also the most commonly used ingredient with konbu kelp to make the dashi broth, ubiquitous in Japanese cuisine.

With the popularization of the nigiri sushi and sashimi, katsuo also started to be eaten raw. In that case, its surface is very often prepared tataki (たたき) style: its surface is quickly seared with a burner or on a straw fire to bring out its strong taste. When talking about seared fishes, the katsuo no tataki first comes to mind. A specialty from Tosa province (present day Kōchi prefecture), its birthplace, it is often served with finely sliced ginger and ground garlic instead of the usual shōyu. It can also be wrapped in shiso leaves and rolled in a maki sushi, the tosa maki (土佐巻き).

Another less known katsuo dish is shutō (酒盗), a variant of shiokara using katsuo (or sometimes other tuna species). The entrails are removed from the fish and left to ferment in salt or brine for a long period of time. It is often eaten as accompaniment when drinking sake.