Often called Japan’s national sport, sumō wrestling is an enthralling world with its particular idiosyncrasies, beliefs and traditions. Enormous wrestlers colliding and grappling on an earthen ring is certainly a fascinating sight, and one of the most common questions when witnessing their impressive frames is often “What are they eating to become so big?!”. A major part of the answer to that question lies in the sumō lifestyle and its signature dish: the chanko nabe. Today, we’ll take a look at the sport of sumō, how wrestlers live, and how they eat. 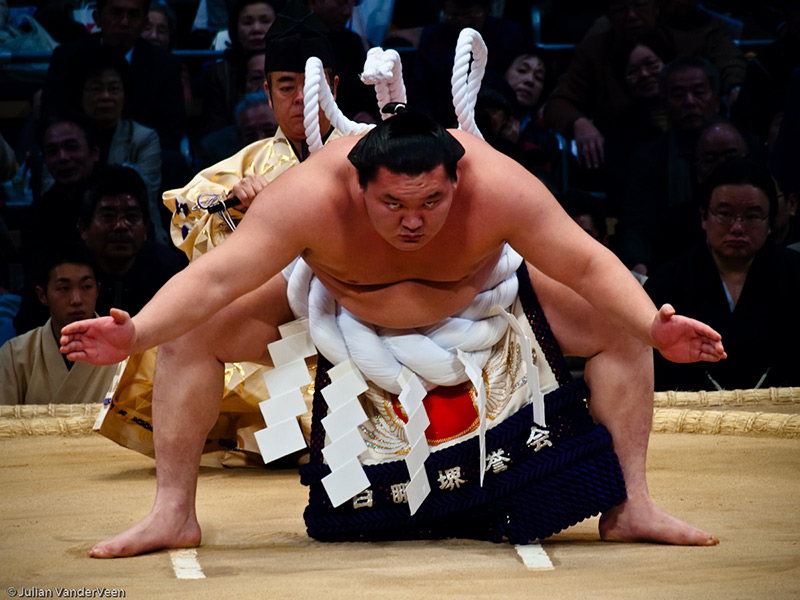 The sport of sumō

The first written mentions of sumō wrestling go back to the Asuka period. The Nihon Shoki (日本書紀, “Chronicles of Japan”, completed in 720) mentions the first historically accredited bout in 642.1 Originating from shintō ceremonies for good harvests, it was as much religious ritual and courtly entertainment as a sport. Over the centuries, sumō evolved into its current, modern form: Ō-sumō (大相撲 – often translated as “Grand Sumō”). Sumō wrestlers (力士, rikishi) are affiliated to a stable (部屋, heya) where they live and practice. They compete at tournaments (場所, basho) held six times per year.

The sport of sumō is highly hierarchical, with all rikishi being assigned a rank depending on their performance during the basho. Their rank not only impacts their position on the basho’s schedule (番付, banzuke), but also their salary, rights, and in general dictates their daily life.

Under the current, professional rules, rikishi face each other during bouts (取組, torikumi) on an earthen ring (土俵, dohyō). A wrestler loses by either stepping out of the dohyō or by touching the ground with any part of his body other than the sole of the feet. Kicks and punches are prohibited, but trips and open palm slaps are authorized. Those rules mean that heavier and bulkier rikishi have an advantage, further compounded by the fact the sport has no weight classes.

Life in the stable

Rikishi are grouped in heya, where they practice, eat and sleep together with the other wrestlers. Life in the heya is highly regulated, with rikishi typically waking up around 6am, before practicing for several hours under the supervision of the stablemaster (親方, oyakata). They do not eat anything beforehand, as this would interfere with the practice, which is very intense (I have been told by one rikishi that he would certainly throw up were he to eat anything).

Around noon, practice ends and the wrestlers eat together. This is typically when the chanko nabe would be eaten. They then nap during the afternoon to rest and help accelerate their weight gains. The lower ranking rikishi also accomplish various chores before the evening meal.

There are no helpers in the stables, and rikishi are responsible for cooking, cleaning, doing the laundry, running errands and other chores. The higher the ranking, the less the wrestler is expected to take part, and rather can focus more on practicing. 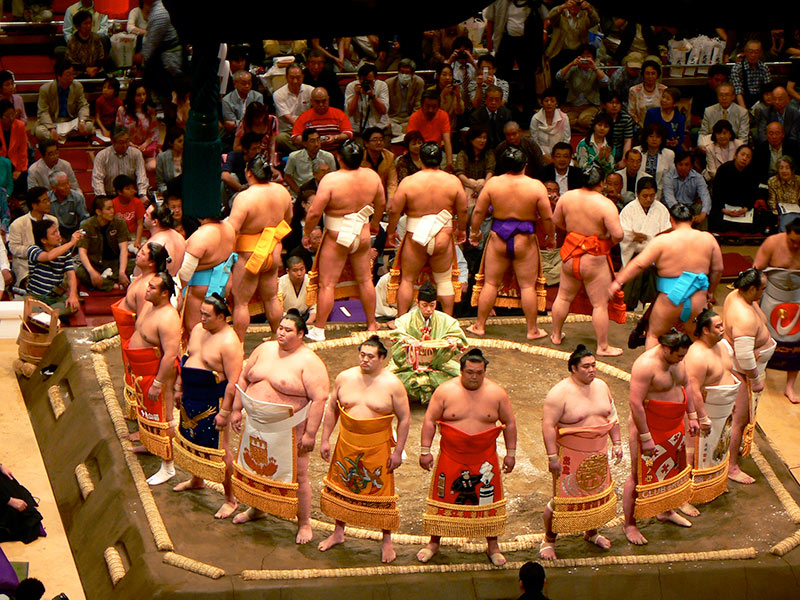 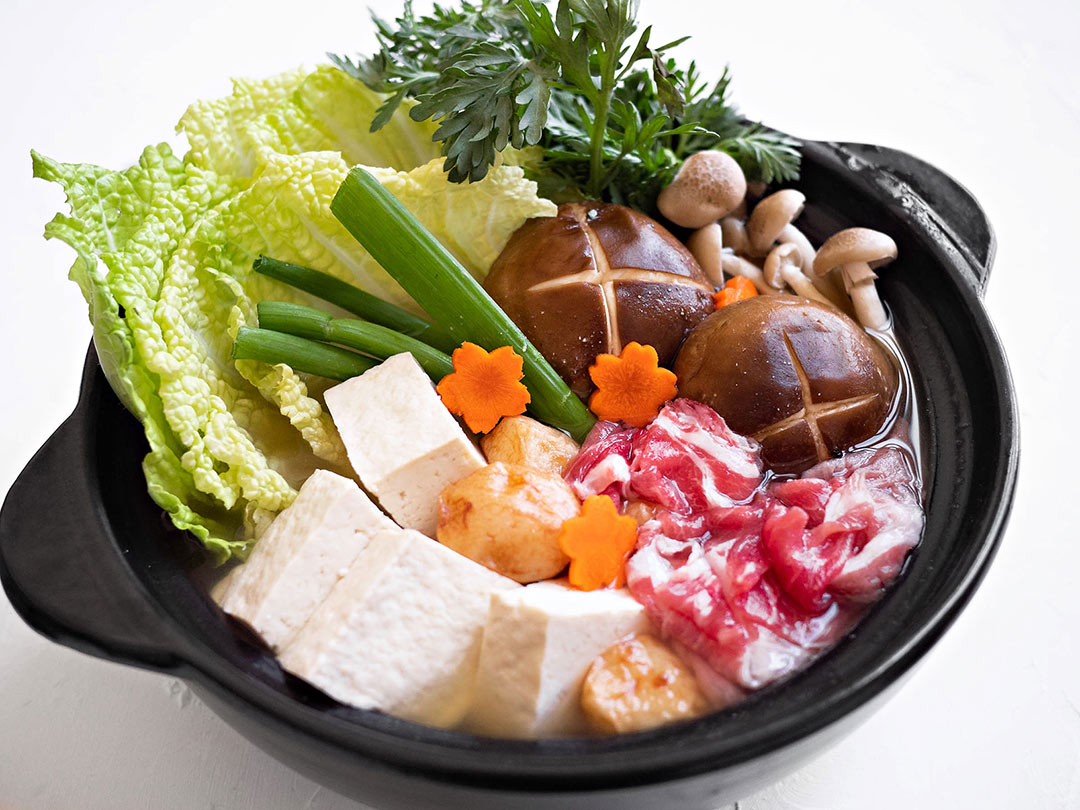 The chanko nabe (ちゃんこ鍋, chanko hot pot) is a hearty dish, with all the ingredients stewed together in a massive pot, where all wrestlers then pick the food. The oyakata and eventual visitors eat first, followed by the senior wrestlers. Once they are done, the junior wrestlers can eat what is left. This can be an issue for the youngest ones, as all the meat and fish might have been eaten before their turn, leaving them only with the vegetables and broth, as recalled by the famous ex-rikishi Kirishima Kazuhiro.2 The chanko nabe is eaten with copious amounts of rice and beer to add more calories.

There are no hard and fast rules for what goes in a chanko nabe. Typically, the vegetables available on the day are used. Meat and seafood are common to provide the proteins. The hotpot can be seasoned with broth, soy sauce, mirin or other condiments. An interesting superstition regarding the ingredients is that no beef, pork or lamb should be going into a chanko nabe, especially during tournament days. As a rikishi loses a bout if his hands touch the ground, animals walking on four legs are seen as inauspicious, whereas the chicken, who walks on two legs, would bring luck. Nowadays however, this rule is not strictly observed.

There are several reasons theorized as to why the typical sumō dish is a hotpot. Other than the ease of cooking the enormous quantities necessary to feed an entire stable, the fact that the food is eaten hot, reducing the risks of food poisoning, and communally, strengthening the bonds between rikishi as well as allowing the oyakata to monitor their diet, has been advanced.3

The chanko nabe in itself isn’t necessarily a high-calorie dish. On the contrary, it can be considered a light meal, as it is mostly vegetables and broth. The rikishi gain weight due to the copious quantities they eat, with generous servings of rice added, as well as the naps they take afterwards to ensure calories are absorbed by the body.

Having had experience cooking the dish regularly, some rikishi go on opening their own chanko nabe restaurant after retiring from the sport. They are especially numerous in Ryōgoku, Tōkyō’s sumō neighborhood. After the day’s bouts, spectators from the Kokugikan venue are often seen eating dinner there. Each restaurant has its own take on the dish, sometimes inspired by the founding rikishi’s stable style of chanko nabe.

The etymology of the term chanko nabe is still being discussed. It could be a fusion of the term chan, meaning “father or elder” in slang, and ko, meaning “child”, possibly meaning a dish eaten together by the oyakata and younger rikishi. Another theory is that the term chan would refer to China, and ko would designate a type of large chinese pot. Wrestlers touring the West of the country would have seen this kind of pot cooking in Nagasaki and have brought the term to Tōkyō.4

The goal of any rikishi is to climb the ranks of the sumō world and win the maku-uchi (highest division) championship, symbolized by the Emperor’s Cup. However, the Emperor’s Cup is far from the only prize the victorious wrestler receives after the tournament. Various local organizations and governments also offer their own prizes, often in the form of local foods and drinks: a 100kg of Aichi kōchin chicken, one year worth of Fukuoka amaō strawberry, one year worth of Kyūshū mentaiko, 1500 bottles of Ehime pon juice, four caskets of refined sake, one cow worth of Miyazaki beef, one tonne of Fukui plum,… The trophy handed over by the Ōita prefecture is even filled with shiitake mushrooms!5

Moreover, some countries also provide a prize to the winner, called “friendship cups”. The most noteworthy one is probably the Japan-France friendship cup, symbolized by a giant, 41×23 cm macaron prepared for the occasion (although the macaron itself is not edible, a complementary prize box is later sent to the winner’s stable).6 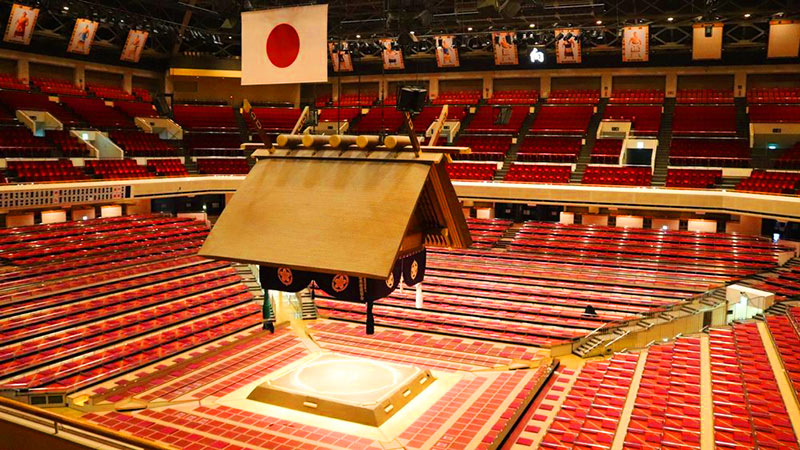 Tournaments in Tōkyō are happening at the grand sumō arena, the Kokugikan, in the Ryōgoku district. In the basement of the venue are located kitchens providing bentō boxes for the spectators watching the day’s bouts. Due to the relation between chicken and sumō cooking, the most popular Kokugikan bentō are the yakitori (chicken skewers) bentō boxes. This yakitori bentō is so popular it can now be found outside the Kokugikan itself.7